1,440 years today, the Holy Prophet Muhammad (pbuh) went for a miraculous journey by night on a winged steed, al-Buraq and was led by the Angel Jibril from Masjidil Haram in Makkah to Masjidil Aqsa in al-Quds (Jerusalem). This event is forever enshrined in the Holy Qur’an in the following verse:

“Exalted is He who took His Servant by night from Masjidil Haram to Masjidil Aqsa, whose surroundings We have blessed, to show him of Our signs. Indeed, He is the Hearing, the Seeing.”

Prior to this miraculous event, in the Year of Sorrow (619 CE), about 10 years after the first Revelation was received in Makkah, the Holy Prophet (pbuh) had just lost his first and only beloved wife of 25 years, Khadijah bint Khuwaylid. She was about 65 years old at the time and it happened not long after the end of the 3-year (616-619 CE) economic and social boycott of the Quraysh against the Banu Hashim that was meant to stop their protection of the Messenger of Allah (pbuh).

Not long after her death, the Holy Prophet (pbuh) suffered another blow with the passing of his beloved uncle and protector, Abu Talib, the chief of the Banu Hashim clan and in whose household he had lived since the death of his grandfather, ‘Abd al-Muttalib. Abu Talib was then succeeded as chief of the Banu Hashim by his brother, Abu Lahab who totally rejected the message of Truth brought by his nephew, the Holy Prophet (pbuh).

Khadijah and Abu Talib had been the main sources of protection and comfort for the Holy Prophet (pbuh) so we could only imagine how defenceless he felt and how deep his sorrow was at the time of their passing.

It was during one of the darkest and most helpless moments in his life that the Holy Prophet (pbuh), was elevated by the Almighty to the highest Heavens in recognition of his refusal to accept defeat and failure in the line of duty. Allah Almighty honoured His Messenger with the event of Isra’ and Mi’raj to have an audience with the Creator at a distance of 2 bow-lengths which was never granted to any His Creation before, and never again after that. This is arguably the most historic moment in Islam and the privilege was only given to the most Beloved of Allah Almighty, Prophet Muhammad (pbuh). 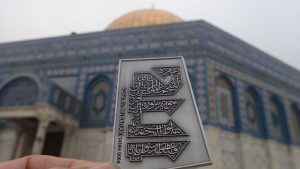 Isra’ and Mi’raj took place on the night of the 27th of Rajab of the twelfth year of the Proclamation, about one year before the Migration of the Holy Prophet (pbuh) from Makkah to Madinah.

The Angel Jibril came to the Holy Prophet (pbuh) in Makkah with al-Buraq, a winged steed slightly larger than a donkey yet smaller than a mule. Jibril then helped the Holy Prophet (pbuh) mount al-Buraq and their amazing Night Journey began soon after. The length of al-Buraq’s stride was the furthest distance that its eyes could see so it covered long distances with lightning speed. The distance between Makkah and Jerusalem was about 1,600 kilometres and was humanly impossible to cover in one night then. 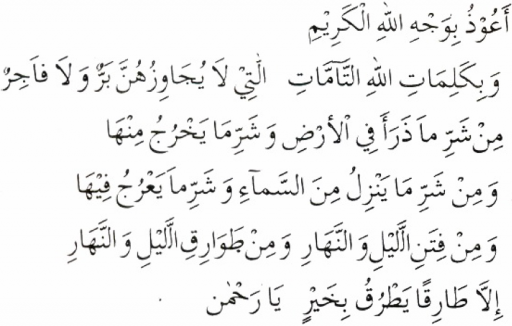 At this, the evil djinn fell dead on his face and his firebrand went out.

Upon his arrival at the area known as Masjidil Aqsa, the Holy Prophet (pbuh) dismounted and tethered al-Buraq to a ring in the gate that was used by previous Messengers of Allah to tie their rides. He then walked into the Masjid – the whole area being a place of prostration.

Narrated Abu Hurairah: “On the night Allah’s Messenger was taken on a Night Journey, two cups, one containing wine and the other milk, were presented to him at Jerusalem. He looked at it and took the cup of milk. Jibril said, “Praise be to Allah who guided you to al-Fitrah (the Right Path); if you had taken (the cup of) wine, your nation would have gone astray.””

It is the Fitrah of the believer to pray for guidance and salvation from the evils of this lifetime.

The Almighty established Masjidil Aqsa as one of the three Holy Masjids in Islam. The first being the Holy Masjid in Makkah, the second is the Prophet’s Masjid in Madinah (which was yet to be established at the time of Mi’raj), and finally the Masjid in the blessed neighbourhood of Jerusalem. It is only to these three Masjids to which Muslims should travel for the purpose of worship. One prayer in Masjidil Aqsa is worth 250 prayers elsewhere, excluding the Prophet’s Masjid where one prayer is the equivalent of 1,000 prayers, and the Holy Masjid in Makkah where one prayer contains the reward of 100,000 prayers. For this reason, Masjidil Aqsa must be guarded and protected zealously by all Muslims.

It was from the Holy city of Jerusalem, in the sacred precincts of Masjidil Aqsa that the Holy Prophet (pbuh) commenced the next stage of his miraculous Night Journey. He ascended to the lowest Heaven from a blessed Rock. This rock can be found today inside the Dome of the Rock, the most famous symbol of Jerusalem. It should not be confused with the main mosque, Masjid al-Qibli, which is on the other side of the al-Aqsa compound. The entire precinct is known as Masjidil Aqsa, but other separate buildings still exist there today.

Prophet Muhammad (pbuh) then moved from one level of Heaven to another and was greeted by the Prophets and Angels who resided there. Then he passed through the Seventh Heaven to the uppermost boundary, to Sidratul-Muntaha, the furthermost lote-tree.

Sidratul-Muntaha is called the uttermost boundary because everything that comes up from the earth or the heavens stops there, and everything that comes down stops there, and because the knowledge of the angels stops at that point. No one has gone beyond it except Prophet Muhammad (pbuh). Beyond this point, he leaves the Heavens and moves into the realm of the Hereafter, the realm that contains Paradise and the Throne of Allah where he stands in the presence of Allah Almighty.

And so the Prophet (pbuh) was given three things:

The Prophet’s praying in Masjidil Aqsa consolidates this bond between the first two places of worship built on earth. It also provides Masjidil Aqsa with a special significance as this is the only place known to us on earth where all the Prophets of Allah prayed together at one given time led by the Seal of the Prophets, Muhammad (pbuh). The fact that all the Prophets were assembled together in al-Aqsa on this special night indicates the inclusive nature of Islam as attested to by the holy Qur’an:

The Messenger has believed in what was revealed to him from his Lord, and [so have] the believers. All of them have believed in Allah and His angels and His books and His messengers, [saying], “We make no distinction between any of His messengers.” And they say, “We hear and we obey. [We seek] Your forgiveness, our Lord, and to You is the [final] destination.”

The lessons from the Night Journey are best summed up in the following verse from the Holy Qur’an as it gave an assurance from the Almighty to the Ummah of Prophet Muhammad (pbuh) regarding His All-Encompassing Justice and Mercy:

Allah does not charge a soul except [with that within] its capacity. It will have [the consequence of] what [good] it has gained, and it will bear [the consequence of] what [evil] it has earned. “Our Lord, do not impose blame upon us if we have forgotten or erred. Our Lord, and lay not upon us a burden like that which You laid upon those before us. Our Lord, and burden us not with that which we have no ability to bear. And pardon us; and forgive us; and have mercy upon us. You are our protector, so give us victory over the disbelieving people.”

All these gifts from the Almighty were granted because of the Prophet’s miraculous Night Journey to the blessed precinct of Masjidil Aqsa, a Masjid that may be far from our sights, but will forever remain close to the hearts of Muslims worldwide along with Masjid an-Nabawi and Masjidil Haram. 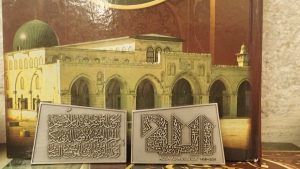