Gold for gold, Silver for silver

Gold for gold, Silver for silver

From ‘Ubada ibn al-Samit: The Holy Prophet  said: “Gold for gold, silver for silver, wheat for wheat, barley for barley, dates for dates, and salt for salt – like for like, equal for equal, and hand-to-hand; if the commodities differ, then you may sell as you wish, provided that the exchange is hand-to-hand.” [Muslim, Kitab al-Musaqat, Bab al-sarfi wa bay’i al-dhahabi bi al-waraqi naqdan, #3853; also in Tirmidhi].

The increased awareness about the importance of gold and silver as currency amongst the Ummah has been a blessing as more Muslims are starting to accumulate gold dinars and silver dirhams as part of their investment portfolio. However, the ongoing dispute about who has the most accurate technical specifications of the dinar and the dirham in accordance with historical and Prophetic traditions has only served to highlight the divisive nature of the numerous groups of minters that have emerged like mushrooms after a heavy downpour.

The Holy Prophet  wanted the Ummah to hold on to wealth that has intrinsic value as opposed to nominal value. Hence the above Hadith was very specific in mentioning the valuable commodities of gold, silver, wheat, barley, dates and salt. It also emphasized on Adab or proper conduct of behavior when trading in these various types of goods as implied by The Holy Prophet  when he mentioned “like for like, equal for equal, and hand-to-hand…” This serves to confirm his stand with regards to the permitted conduct of exchange for his Ummah.

If the commodity were measured in Troy ounces, the standard weight of fine gold or fine silver within the coin must be at least 31.1034 grams. In this regard, it should be noted that Malaysia’s Kijang Emas medallion contains a minimum of 31.105 grams of fine gold and is therefore slightly heavier than the standard Troy ounce.

What about the standard unit of measure known as the Chinese Tael? It has always been a historic part of the Chinese system of weights and currency and is very much still in use today in parts of the world where there is a significant Chinese population. The weight of the Tael in China is standardized at 31.25 grams while the Taiwan Tael is established at 37.5 grams. In contrast, the Hongkong Tael is set at 37.799364167 grams while the Hongkong Bank gold Tael bar weighs in at 37.427 grams.

The Tola of India is another historic unit of weight, but it has been amended by the British East India Company to equate 0.375 Troy ounces or 11.6638038 grams. Apart from India, the gold Tola bars are still popular in Pakistan, Singapore and some parts of the Middle East. 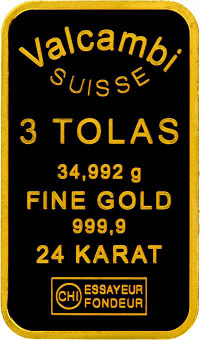 What do all these different weights and measures mean for the Ummah? Are Muslims prohibited from trading with any of these countries if they do not subscribe to a specific gold dinar or silver dirham standard? The Islamic Republic of Iran produces Mesghal gold in denominations of 4.6083 grams. Do they need to embrace a standardized gold dinar and silver dirham currency in order for the Ummah to be able to do trade with them?

All in all there are more than 50 different types of gold bar weights around the world today, and they are normally traded according to the precise weight of their fine gold content. It is calculated by simply multiplying the bar’s gross weight by its gold purity (or fineness). For example, a 1000-gram bar with a millesimal purity of 995 has a fine gold weight of 995 grams (1000 grams x 0.995).

In the end, we should ask ourselves whether it would be in our best interest to adopt just one particular system of weight and measure as currency and trade within limitations, or if we should aspire to follow what The Holy Prophet  prescribed in the Hadith for his Ummah to go about doing business anywhere in the world. It all boils down to gold for gold, silver for silver, like for like, equal for equal, hand-to-hand… Allah   knows best.