Reviving the Blessed Form of Mahar

Reviving the Blessed Form of Mahar

ll praise and gratitude are only for Allah Almighty. We seek guidance and forgiveness from Him. We also seek refuge in Him from the evils of our own doing. Whoever Allah guides, none can lead him astray. Whoever He leaves to go astray, none can guide him back to the right way. We testify that there is no God but Allah, and we testify that Muhammad is the servant of Allah and His Messenger.

The soul, the heart and the mind were created in a balance, in a state of fitrah or a natural state of the human being. In the Holy Qur’an, Allah Almighty says:

“… Allah has endeared Faith (Iman) to you, and has made it beautiful in your hearts …” (Surah al-Hujurat 49:7)

Central to the union of hearts, minds and souls is the oldest ‘contract’ between two people in marriage, made in the name of Allah the All-Seeing, the Witness. So critical is this contract in the building of a thriving Islamic community, i.e. by bringing families together, that the realization of this part of one’s life is equated to fulfilling half of one’s faith. And the heart knows that at the threshold of the commitment with one’s soulmate, that God the al-Wadud (the Loving) sanctions this sacred institution.

“And of everything, We have created pairs that you may be mindful.” (Surah az-Zariyat 51:49)

At the Threshold of Marriage

In the search for a relationship that brings love, trust, harmony and compassion, we refer to the Holy Qur’an (for people of understanding) and its description of marriage.

““And among His Signs is this, that He created for you mates from among yourselves, that you may dwell in tranquility with them, and He has put love and mercy between your (hearts) …” (Surah ar-Rum 30:21)

When Allah unites two partners in Islam, it is the strongest of bonds. A do’a or prayer by a couple could be as follows:

““I enter this contract, this act of worship, in the name of our Creator and Sustainer, as a servant of God. I enter this sacred institution to grow and enrich my life and that of others. My companion in this journey is one who fears Allah in all matters, and who knows his/her ultimate return is to God, the Sublime, the All-Forgiving.”

Amiin, and a very essential aspect of binding this sacred contract is the mahr.

What is the Mahr?

The mahr is a compulsory part of an Islamic marriage contract. It is a gift of money, possessions or property made by the husband to the wife, which becomes her exclusive property. It is an admission of her independence, for she becomes the owner of the money or property immediately, even if she may have owned nothing before. It is also intended as a token of the husband’s willing acceptance of the responsibility of bearing all the necessary expenses of his wife.

The Holy Prophet  gave each of his wives a payment of mahr ranging from token sums such as the granting of freedom from slavery when being made a wife, to the payment of 500 Nabawi silver dirhams. His wife Umm Habibah’s mahr consisted of 500 Nabawi gold dinars which is the equivalent of 5,000 Nabawi silver dirhams then, this sum having been fixed by Najashi, the Negus (a Christian ruler) of Abyssinia (Abu Dawud, Kitab an-Nikah, 2:235).

With regard to the question about the mahr of the Mothers of the Believers:

She said: “The mahr that he gave to his wives was twelve uqiyah and a nashsh.”

He asked: “Do you know what a nashsh is?”

She answered: “It is half of an uqiyah.”

That amounted to five hundred Nabawi silver dirhams, and this was the mahr given by the Holy Prophet (sallallahu ‘alaihi wa sallam) to his wives.

There was in fact no fixed upper limit for mahr. Allah Almighty required the provision to depend upon the circumstances of the husband:

Caliph Umar ibn al-Khattab  once gave a public sermon in which he asked the congregation to refrain from fixing heavy mahrs, and said that the Holy Prophet  had declared none should give more than 500 Nabawi silver dirhams. A woman immediately stood up and challenged him quoting the verse:

“But if you decide to take a wife in place of another, even if you had given the first a heap of gold (qintar) for a dowry, you shall not take the least bit back …” (Surah an-Nisa’ 4:20)

Caliph Umar ibn al-Khattab  then went back to the minbar and withdrew his words stating: “The woman is right, and Umar is wrong. Whoever wishes may give as much property as he wishes to give.” (Narrated by Ibn Hajar al-Athqalani, Fath al-Bari, 9:167).

This does not mean that the woman is a product to be sold, rather it is a symbol of honour and respect, and a sign that the husband is willing to shoulder his responsibilities and fulfill his duties. Shari’ah does not stipulate a certain limit for the mahr that should not be overstepped, but it does encourage reducing the mahr and keeping it simple.

The Holy Prophet  said: “The best of marriage is that which is made easiest.” (Narrated by Ibn Hibbaan, classed as Sahih by al-Albaani in Sahih al-Jaami’, 3300).

The Holy Prophet  also said: “The best of mahars is the simplest (or most affordable).” (Narrated by al-Haakim and al-Bayhaqi, classed as Sahih by al-Albaani in Sahih al-Jaami’, 3279).

Following the Footsteps of the Holy Prophet

The Sasanid Persian king in power during all the marriages of the Holy Prophet  was Khusrau II who ruled from 590 – 628 CE. According to Islamic tradition, the standard mahr being paid by the Holy Prophet  to his wives including Khadijah (radiyallahu ‘anha) and Aishah (radiyallahu ‘anha) was 500 Nabawi silver dirhams. They were actually Sasanid silver drahms from the era of Khusrau II. The Sasanians used the silver drahm currency that was minted according to the standards of Alexander the Great who had defeated King Darius III and conquered the Persian empire in the year 330 BC. In fact, it was Alexander who simplified the exchange rate between silver and gold by fixing it at 10 units of silver to equal one unit of gold.

Based on this clear historical fact, we can picture the Nabawi silver dirham being used as mahr by the Holy Prophet (sallallahu ‘alaihi wa sallam) as follows: 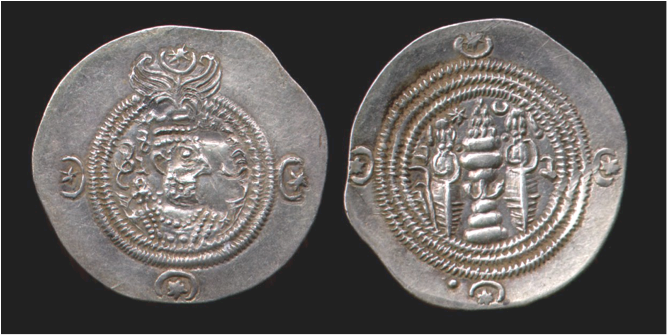 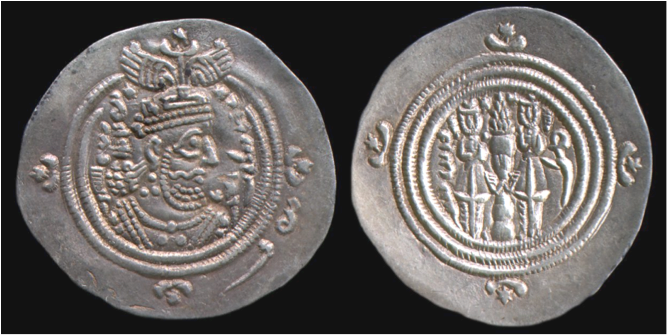 The average weight of the silver drahms of Khusrau II was between 4.11 – 4.15 grams (source: E.J. Brill’s First Encyclopaedia of Islam, 1913-1936) and their average purity of silver was considered the highest of its time at 95%. (source: “Sasanian and Arab-Sasanian Silver Coins from Turfan: Their Relationship to International Trade and the Local Economy” by Jonathan Karam Skaff).

The subsequent silver dirhams minted by latter Arab rulers especially during the Umayyad era only had a silver purity of between 85 – 90%. Therefore, we can safely conclude that the Holy Prophet (sallallahu ‘alaihi wa sallam) prescribed only the highest fineness of silver coinage available for his beloved Ummah at the time. For a silver dirham to be considered as Nuqud or of good cash value then, it had to be at least 4 grams in weight. With these parameters in mind and to adapt to today’s international bullion coinage standards, the Five Nabawi Silver Dirham coin was minted with a weight of 20 grams and a silver fineness of 999.

To revive the Sunnah of the actual mahr used, steps were taken to market the Nabawi silver dirham in a convenient and presentable form for couples who wish to marry according to the Sunnah of the Holy Prophet (sallallahu ‘alaihi wa sallam).

According to Islamic Fiqh, there is no minimum or maximum limit to the amount of Nabawi silver dirhams to be used as mahr in a wedding, and the future potential for their use in any denomination is limited only by the human mind. More importantly, bullion silver in any form will always be considered as an internationally accepted value of exchange for goods and services in any economy anywhere around the world. Hence, the future of mahr in the form of the Nabawi silver dirham can only get brighter, inshaAllah.