The Nabawi Silver Dirham: Seeking the Barakah of Allah

The Nabawi Silver Dirham: Seeking the Barakah of Allah

“If the people of the towns had but believed and feared Allah, We should indeed have opened out to them (all kinds of) blessings from heaven and earth: but they rejected (the truth), and We brought them to book for their misdeeds.” (Surah al-A’raf 7:96) 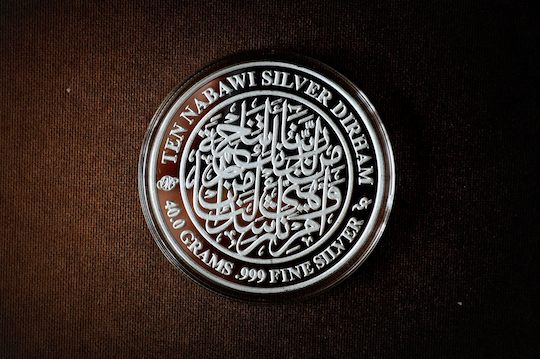 All around the world today, people are looking forward with renewed hope to the tenure as President of the United States of America by a man with an uncommon name and family roots. While it is very true that Barack is Swahili for a term that means “blessing” in Arabic, we have yet to see whether the name fits the man who will determine the fate of over a million Muslims in Palestine who have long been laid siege to by the political and military might of the “free” world.

Barack’s father was a native of Kenya which shares a border with Ethiopia, the once great Abyssinian empire of the era of the Holy Prophet, but the man with the skinny legs (according to the California Governor, Arnold Schwarzenegger) pales in comparison to the truly great deeds of another person by the same name in Islamic history, Barakah (radiyallahu ‘anha).

Barakah was an Abyssinian slave girl who was bought by ‘Abdullah , the father of the Messenger of Allah , and she was eventually brought to live together with Aminah (radiyallahu ‘anha) when he married her. She was a very close Sahabah of the Holy Prophet  whose story was often overshadowed by the great accomplishments of the other Companions (radiyallahu ‘anhuma) around the Messenger, but this remarkable woman of Paradise is the only person in history who can claim to have taken care of the Holy Prophet’s parents (radiyallahu ‘anhuma) and stayed with the Holy Prophet  from the time of his blessed birth till the time of his passing on to the next life. The amazing story of Barakah or Umm Ayman (radiyallahu ’anha) as she was later known can be read in the following link: http://www.islamicbulletin.com/newsletters/issue_23/baraka.aspx

At-Tabarruk means to seek Barakah or blessings of Allah Almighty in something, and is often associated with growth or increase in worldly possessions such as children and wealth. However, pious people prefer knowledge and Taqwa (high consciousness of Allah Almighty) above all else because they consider the good and righteous deeds in this lifetime to be the building blocks of their “golden bridge” to the Hereafter. At the same time, no other methodology or path can be deemed to be more superior to the Sunnah of the Holy Prophet  as the secret of the Deen and the Barakah of Allah Almighty are securely intertwined and locked within it.

Affirming the importance of adhering to his path, especially for the subsequent generations of Muslims, the Holy Prophet  once said,

“Those of you who live after me will see great disagreement. You must then follow my Sunnah and that of the Rightly Guided Caliphs. Hold on to it, and stick fast to it. Avoid novelties [in matters of religion], for every novelty is an innovation, and every innovation is an error.”

The Holy Prophet  also said, “Khilafat (Caliphate) would continue for thirty years after Nubuwwat (Prophethood), then it will change into kingship.” (Hadith related by Hakim)

Most scholars would argue that this time limit ended with the Caliphate of Hadrat ‘Ali (karamallahu wajhahu). However, if the six-month Caliphate of Hadrat Hasan  were to be counted, then the thirty years period would be fully completed and would comply with the above Hadith.

When we remain steadfast in following the footsteps or the Sunnah of the Holy Prophet  and the Rightly Guided Caliphs (radiyallahu ‘anhuma), we are actually attracting the Barakah of Allah Almighty to us. In this case, the silver dirham was the Sunnah currency of Islam for the common people throughout the administration of the Holy Prophet and his Rightly Guided Caliphs (radiyallahu ‘anhuma).

Originally known in history as a Sasanian Persian coin, its original weight and measure is recreated today in the form of the Nabawi silver dirham to denote its association with the Sunnah currency used during the lifetime of the Holy Prophet.

“And those who strive in Our (Cause), We will certainly guide them to Our Paths: for verily Allah is with those who do right.”

Barakah is only from Allah Almighty as stated in many verses of the Holy Qur’an:

“… Blessed be Allah, the Cherisher and Sustainer of the Worlds!”

“… So blessed be Allah, the Best to create!”

“Blessed be He Who sent down the Criterion to His Servant …”

“Blessed be He Who made constellations in the skies …”

“Blessed be He in Whose Hands is the Dominion …”

“Blessed be the Name of thy Lord, full of Majesty, Bounty and Honour.”

Barakah must be requested from Allah Almighty, and It is only He alone Who has the right to place it in whomever He wills from His loyal Servants and in whatever He wills from His Creation. However, He will never deny the request of the Holy Prophet  if he intercedes on behalf of the Ummah who faithfully follow his Sunnah, inshaAllah.

The methodology of the Holy Prophet  is actually the culmination of the methodologies of all Prophets of Islam before him beginning with Prophet Adam (‘alaihissalam). Within it is a divine or spiritual code that helps the Ummah to remain in constant contact with Allah Almighty, and to therefore remain within the realm of His unlimited Barakah. Barakah can be deemed to be either good or bad according to the individual interpretation of the believer, but to the People of Knowledge, it is always good as it is a gift from Allah Almighty.

There is Barakah in doing righteous action, especially in re-establishing the Sunnah of the Holy Prophet . Hence, when we help to revive the appropriate attributes of the Nabawi dirham in terms of its high silver purity and weight, we are actually attracting the Barakah of Allah Almighty by submitting to the methodology of the Holy Prophet .

The basic minimum value or Nisab with respect to the Shari’i currency of the common people during the Holy Prophet’s era before Zakat is payable is 200 silver dirhams. As the Muslim community was too small then to mint their own currency, the Holy Prophet adopted the prevalent silver drachma of the Sasanian Persians. The Sasanian Persians used the silver drachma currency that was minted according to the standards of Alexander the Great who had defeated King Darius III and conquered the Persian empire in the year 330 BC. A typical silver dirham during the Holy Prophet’s era would have looked similar to the one in the following picture 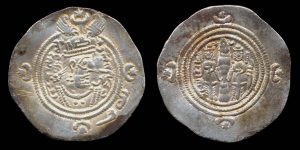 “And this is a blessed Message which We have sent down, will ye then reject it?”

The final request by Aminah (radiyallahu ‘anha) to her faithful servant, Barakah (radiyallahu ‘anha) remains valid today because it holds the key to the salvation of the Ummah. By reviving the Nabawi silver dirham, we are actually honouring her dying request because her last words still ring true till today, “… Don’t ever leave him (Holy Prophet Muhammad ).”