The Neglected Element of Taqwa in The “1,000 Dinars” Verse

The Neglected Element of Taqwa in The “1,000 Dinars” Verse

“… And for those who fear Allah (Taqwa or high God-consciousness), He [ever] prepares a way out. And He provides for him from [sources] he never could expect. And if anyone puts his trust in Allah, sufficient is [Allah] for him. For Allah will surely accomplish His purpose: Verily, for all things has Allah appointed a due proportion.” 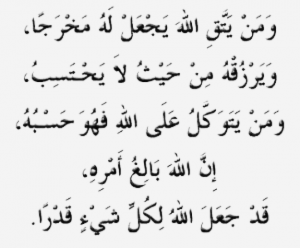 Historically, Rasulullah  never named the above passage from the Holy Qur’an the “1,000 Dinars” verse, but many unverified stories have appeared over the years including one version where Prophet Khidr (‘alaihissalam) was somehow responsible for helping some poor man out of debt by advising him to recite this verse daily. As a result, you can find the “1,000 Dinars” verse hung on the walls of many Muslim shops, offices and households all over the country today. The tenacity with which these business and home owners hold on to the faith that this verse will help bring opportunity and other forms of bounty from Allah Almighty is so great that it would be considered almost sacrilege not to believe in its miraculous power of attraction. However, when it comes to income-related aspirations, most Muslims will normally visualize it to be in the form of the local or the various international paper currencies in the market, and not the Nabawi gold dinar that the verse was aptly named after.

It would have been inconceivable 1,400 years ago to associate a verse from the Holy Qur’an with something so unholy as usury-based ‘fiat’ money, but that is the sad reality of life as most Muslims today do not remember the Nabawi gold dinar that was once the Sunnah currency of Islam during the era of Rasulullah  and the Khulafa ar-Rashidin (radiyallahu ‘anhuma). The Holy Prophet  reminded his Ummah to forsake Riba or usury in his Farewell Sermon on Mount Arafah on the 9th of Zulhijjah in the 10th year of Hijrah, but we have instead embraced and institutionalized the very thing that was strongly forbidden by Allah Almighty in His infinite Wisdom.

“Those who devour usury will not stand except as stands one whom Satan by his touch has driven to madness. That is because they say: “Trade is like usury,” but Allah has permitted trade and forbidden usury. Those who after receiving admonition from their Lord, desist, shall be pardoned for the past; their case is for Allah [to judge]; but those who repeat [the offence] are Companions of the Fire: they will abide therein [forever].”

The final revelation received by the Holy Prophet just 5 days before he returned to Allah Almighty was the verse regarding Riba. It was directed toward those who believe and have Taqwa (high consciousness of Allah), and a warning of grievous retribution to those who refuse to follow His Divine Will, “O ye who believe! Fear Allah (Taqwa), and give up what remains of your demand for usury, if ye are indeed believers. If ye do it not, take notice of war from Allah and His Messenger …”

How could we adopt something other than what was prescribed by Allah Almighty through divine revelation to His beloved Messenger ? Have we come to the stage where the religion of Islam has become “strange” to its followers? What is the rationale for preferring unbacked printed paper money over the Nabawi gold dinar as a medium of exchange for our goods and services? Do we really need to subject ourselves to one economic recession after another just because we deem it necessary to be part of an unjust global monetary system that is constantly being subjected to manipulation by conniving groups of individuals with power to determine the value of our wealth according to their own will? Where is the element of Taqwa or high consciousness of Allah Almighty within us as Muslims who hope for the Shafa’at or intercession of the Holy Prophet  on our behalf on the Day of Judgement?

The Messenger of Allah  once pointed to his chest and said, “Taqwa is here.” (Hadith related by Muslim)

Taqwa is the internal spiritual compass within all of us that guides us on the path to Allah Almighty. It helps to develop our conduct and character in this lifetime so that we may be deemed to be the perfect Servant of Allah Almighty or “AbdAllah” in the sight of our Creator. This requires one’s complete and unequivocal submission to His Divine Will. We were created to worship only Allah Almighty, and hence we must aspire to attain a certain degree of nearness to Him in order to facilitate our ultimate return to our final abode of rest in the Hereafter.

“This is the Book; in it is guidance sure, without doubt, to those who fear Allah (Taqwa); who believe in the Unseen, are steadfast in Prayer, and spend out of what We have provided for them; and who believe in the Revelation sent to thee, and sent before thy time, and [in their hearts] have the assurance of the Hereafter. They are on [true guidance] from their Lord, and it is these who will prosper.”

The great Companion, Sayyidina Umar ibn al-Khattab  alluded to the meaning of Taqwa by describing it as having to walk very cautiously through a forest where there are many thorny bushes so as not to get pricked or to get one’s clothing torn by them. Please bear in mind that we are all now walking through this very same forest and only the element of Taqwa within us can guide us to safety. In our case today, the whole forest is unfortunately overgrown with the thorny bushes of Riba or usury.

The cat-loving Companion, Abu Hurairah  reported that the Messenger of Allah said, “A time will certainly come over the people when none will remain who will not devour usury. If he does not devour it, its vapour will reach him.” (Hadith related by Ahmad, Abu Dawud, an-Nasai, and Ibn Majah)

In the 2nd year of Hijrah, The Holy Prophet  instructed his followers to fast on the 9th and 10th days of Muharram to commemorate the deliverance of many Prophets of Islam from danger. On the day of Ashura, the Ark of Prophet Noah (Nuh ‘alaihissalam) landed safely on Mount Judi after the Great Flood had receded, Prophet Abraham (Ibrahim ‘alahissalam) survived the terrible bonfire of King Nimrod (Namrud), and Prophet Jacob (Ya’akub ‘alaihissalam) regained his lost eyesight when the shirt belonging to his son, Prophet Joseph (Yusuf ‘alaihissalam) was thrown over his face. It was also on the Day of Ashura that Prophet Joseph (Yusuf‘alaihissalam) was rescued from the deep well that he was thrown into, Prophet Job (Ayyub ‘alaihissalam) was cured of his seemingly incurable illness, and Prophet Moses (Musa ‘alaihissalam) helped his people escape from Pharaoh (Fir’aun) by parting the Red Sea with the Divine Will of Allah Almighty. Prophet Jonah (Yunus‘alaihissalam) was also released from the stomach of the whale that had swallowed him, and Prophet Jesus (Isa ‘alaihissalam) ascended into Heaven to escape death at the hands of the Jews on this very day in history. It is also from this day onward that we should strive to strengthen our Taqwa in the sight of Allah Almighty in the hope that the Ummah will be delivered from the clutches of Riba one day, inshaAllah.

“… Verily the most honoured of you in the sight of Allah is [he who is] the most Righteous (the highest station of Taqwa) of you. And Allah has full knowledge and is well acquainted [with all things].”

There are no more Prophets sent to the Ummah after the Message was completed by Rasulullah , but we still share the same opportunity today as in the past to be regarded as a Righteous Servant of Allah Almighty by striving to attain a higher station of Taqwa. Consciousness of Allah in every aspect of life cannot be achieved without a high degree of certitude and patience such as that manifested by the Prophets of Islam throughout history. We may tread very carefully in this forest and still get pricked by the thorny bushes of usury. However, it is good to set the spiritual compass of Taqwa within us all to point toward the direction of Allah Almighty and the eventual return of the Nabawi gold dinar. For Allah will surely accomplish His purpose …