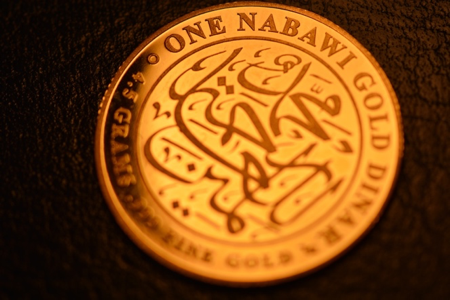 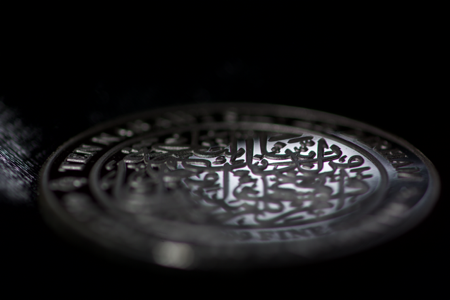 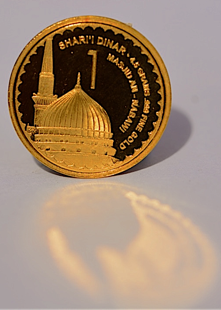 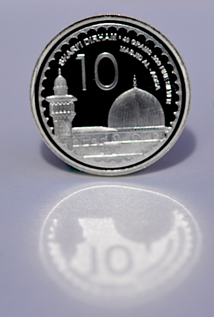 Rules of Fiqh (Muslim jurisprudence) were based on these weights and measures and hence the tagline “Reviving the Prophetic Weights and Measures” was chosen for 24 Qirats’ as our thrust, when the first One Nabawi Gold Dinar was minted in July 2010.

With emphasis placed on verses of the Quran and Hadith, 24 Qirats embarked on coinage reform of its own in returning to the standards set during the time of the beloved Prophet Muhammad (pbuh), setting it apart from the other minters in the market.

The First One Nabawi Gold Dinar

Prophet Muhammad (pbuh) said: ‘Allah is Beautiful, and Loves Beauty.’ The Thuluth script for the Arabic calligraphy on the coins was selected for its stylistic, cursive and elegance befitting to enhance the beauty of the Quranic verses and hadiths for the Nabawi Gold Dinars and Silver Dirhams.

With the verse, “Muhammad Seal of the Prophets”, the very first Nabawi Gold Dinar was minted in the model of the Sasanian coinages where the name and title of the emperor was proudly announced for all to behold. 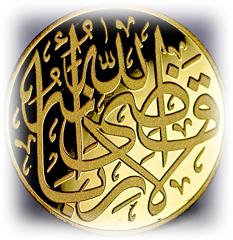 The message “Allah has forbidden Riba “ was chosen for the reverse side of the gold dinar to denote the danger of riba or usury to the world, the injustice it represented that God AlMighty forbade it to be practiced on this earth. It was mentioned in Prophet Muhammad’s (pbuh) final sermon on the Day of Arafah 10AH (Khutbatul Wada’), which also repeated the warning of Prophet Isa ibn Maryam (a.s) when he expelled the moneychangers from the House of Worship in his era. 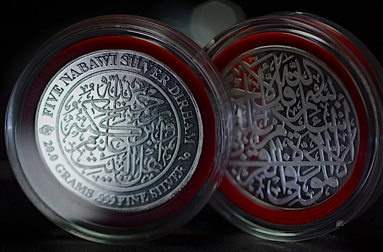 In the months that followed the introduction of the One Nabawi Gold Dinar, the first Five Nabawi Silver Dirham followed suit in April 2011 with the messages from Surah Hud (11:73) on its obverse and Surah Ash-Shura (42:23) on its reverse. The First Five Nabawi Silve Dirham emphasized the nobility of the chosen descendants of the Prophet Ibrahim (a.s) and Prophet Muhammad (pbuh) as they represented the spiritual beacons of guiding light for those who wanted to reach the safety of the heavenly shores from the choppy waters of this ephemeral lifetime. 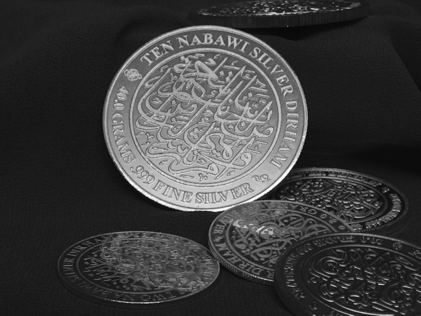 The iconic Ten Nabawi Silver Dirham was minted from July 2012 with a du’a (prayer) from Surah Al-Kahf (18:10) as protection from the fitnah or trials and tribulations arising from the deception of the Dajjal, and the appeal to Allah AlMighty for His Guidance and Protection. The obverse of the Ten Nabawi Silver Dirham denotes the importance of ‘Holding on to the Rope of Allah’ or the Quran and guidance set forth by Prophet Muhammad (pbuh) – not to let go in any situation or circumstances.

The Five Nabawi Silver Dirham with the Salawat 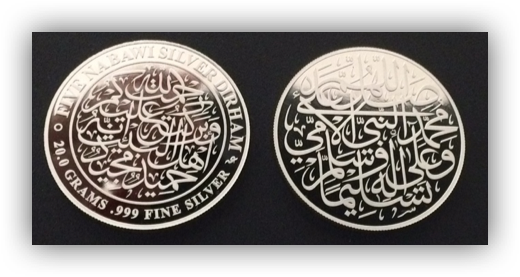 The Five Nabawi Silver Dirham was redesigned twice (August 2015) to incorporate the Salawat, invocations and salutations to Prophet Muhammad (pbuh) and his Ahl al-Bayt or People of the House, as the AlMighty and the Angels also invoke their blessings for peace upon them.

The One Nabawi Gold Dinars (Second and Third) 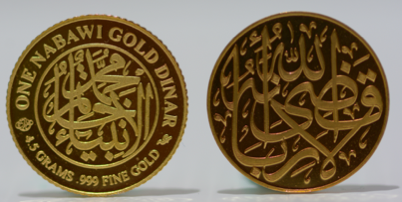 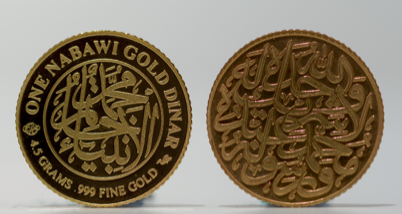 The Second One Nabawi Gold Dinar bridged the coin designs between the First and the Third, as the obverse design kept the verse of Muhammad (pbuh) the Seal of the Prophets (from the First). The obverse design is the same as the Third One Nabawi Gold Dinar with the verse, “Muhammad, Mercy to the Worlds” as he remains the most beloved of the AlMighty and whose intercession on the Day of Judgement for his acknowledged Ummah (followers), is worth more than anything of perceived value in this lifetime for all the creation of Allah AlMighty. To complement this magnanimous title awarded by the Creator to His Most Beloved Creation, the verse “Allah is One, without partner, Muhammad is His Messager” is imprinted (with different calligraphy style) on the reverse of both the Second and Third Nabawi Gold Dinar  to relive the moment when the pillar of solah (prayer) was revealed to the Prophet Muhammad (pbuh) when he ascended to the Heavens (mikraj) to receive it in the presence of the AlMighty Himself at the distance of two bows length.

Since the reminting of the original standards of the gold dinar and silver dirham Prophet Muhammad’s era began in 2009, the founders of 24 Qirats have also undertaken the responsibility of sharing our knowledge with zakat collection centres in Malaysia to convince them to move away from the lesser Nisab (minimum income standards) of gold and silver that was incorporated during the monetary reforms of the Umayyad Caliph Abdalmalik bin Marwan (7AH-79AH). The initiative to buy and exhibit the gold dinars and silver dirhams from the timeline of Prophet Muhammad (pbuh) begun since 2012 with the purchase of several Byzantine solidi and Sasanian drachmas.  With these coins in hand, 24 Qirats has managed to convince more and more gold dinar and silver dirham enthusiasts, coin collectors and numismatists regarding the actual standards of Muslim coinage circulating in Makkah and Madinah during our Prophet’s lifetime.

Alhamdulilah, all praise due to Allah AlMighty , 24 Qirat’s mission to reverse the coinage standards of AbdalMalik bin Marwan is succeeding. May the AlMighty Guide us all toward His Bountiful Mercy, Ameen …..